Rosenites tend to look rather different from each other. Their different body make ups are because of the variety of women who come to Arri. There is no one way a Rosenite should look except maybe their eyes, and even that is not a rule. The only thing that has become expected is their sun-kissed skin because of the desert they reside in.

Rosenite eyes are an ivy green with crimson around the pupil. This might be due to the plant make up and vampire blood in their systems. Others who are born still have a chance to get their parent’s futures. So while the Rosenite eyes are quite common in Arri, it is not out of the ordinary to meet a Rosenite who has blue or even brown eyes.

Rosenite eyes tend to come with the turning process of using essence. Essence is the magic that brought the Rosenite Willow to life. Each Rosenite is fueled by this and can easily regenerate their bodies thanks to it.

Even in the royal family, the looks are heavily dependent on Willow. Thanks to the make up of her body with the different plants of many colors, most of her children and grandchildren got varied looks. This can be seen with the queens, her grandchildren, especially.

In addition to their looks, most Rosenites tend to have a rather lovely singing voice. They seem to get this from the voices of the flowers that grow within them. Angela, the Matron Daughter of Arri, speaks fondly of all the flower voices in her garden. It would seem that many sing from sun up to sun down. It’s really no surprise that Rosenites gained this ability and that we are actually able to understand it.

Rosenites are fast like their vampire counterparts and possess the ability to see in the dark and far away. They also are able use their bodies to produce plants and seeds, this might be due to the plant bodies they have, though only born Rosenites seem to have this ability.

They are naturally able to communicate with plants since they are technically part plant themselves. Rosenites do not have the normal chance of having a son, this might be due to a curse that the hedge witches put on them at the last moment before Willow ended their existence.

Rosenites can reproduce with humans and vampires without causing halflings, this is how many of the Rosenites of Arri manage to reproduce pure-bloods.

Rosenite fangs are not long or even grow like vampires can, instead their fangs are short and hurt a lot more. Their bite can be venomous to vampires if the assaulting Rosenite pumps her essence into the wound.

Their fears are mostly illogical as well, or so it would seem on the surface. Due to their plant like bodies many of them are scared of being off land. They are prone to severe sea sickness and air sickness as well making airship and ship travel hell on their bodies.

Rosenites are resistant to most poisons thanks to their body make ups. The only plant in Revaliir that seems to make them remotely sick is the Corpse Flowers found in Laeto and Feeorin, though you won’t catch Rosenites near them.

The females of the race are extremely territorial over their mates. Fights break out regularly if one thinks another is trying to steal their mate. This is due to the low population of males in the area, in this way Rosenites are like animals though they are governed and punished for their fights if they get too bad.

Rosenites are able to use just about any magic, however out of respect or fear water magic is prohibited not by the queens but by the society in general. Water magic is reserved for the Oracles of Arri. They are highly talented with magic but much prefer to do things physically.

Rosenites have few laws they follow. Their main law and vow is that children are not to be hurt. Those caught harming children are sentenced to death to the Casimir. Women are to be asked whether they want to stay or not in their society. Finally no one is to be turned against their will, actually for Rosenites it is impossible to turn someone without their permission.

Written by Laurence of Bohari, a traveling scholar 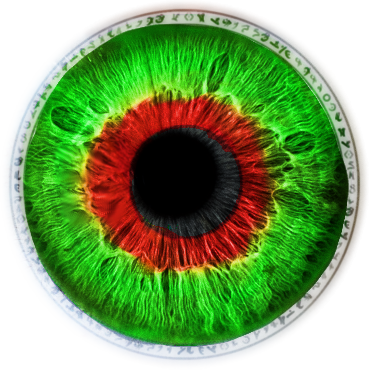 This is an example of what a typical Rosenite eye looks like.